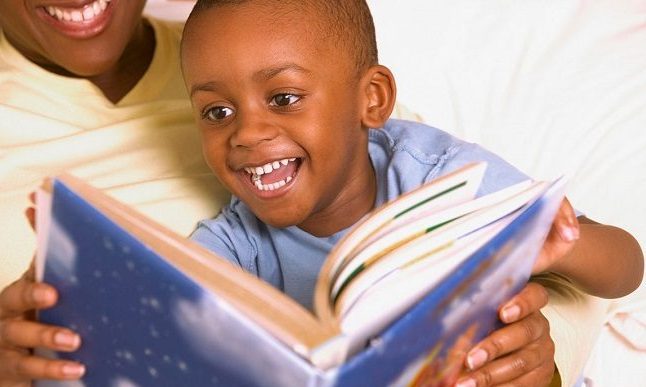 This is staggering. And it can have serious consequences. Children who experience this drought in heard words have vocabularies that are half the size of their peers by age four, putting them at a disadvantage even before they enter a classroom, and this word gap can lead to disparities not just in vocabulary size, but also in school readiness, long-term educational and health outcomes, earnings, and family stability even decades later.

HRSA's Maternal and Child Health Bureau sponsored the Bridging the Word Gap Challenge to spur innovative solutions to promote the early language environment and address the word gap. Through the challenge mechanism, we hoped to reward the development and testing of scalable innovations that drive behavior change among parents and caregivers. The goal of the Challenge was to develop a low-cost, scalable, technologically-based intervention that drives parents and caregivers to talk and engage in more back-and-forth interactions with their young children (ages 0-4).

We saw the use of a federal challenge as a way to reach non-traditional partners – like coders, private sector start-ups, research and development accelerators in the private sector, and others, and to encourage new and different innovative approaches to the word gap issue. With the guidance of our Challenge Advisors and the HHS IDEA Lab, we approached the design of the challenge with this goal in mind.

The challenge was structured in three phases over a year and a half. Applicants were awarded cash prizes and non-monetary incentives as they moved through the phases. A total of $300,000 in prizes were awarded. MCHB worked with a contractor in the implementation of the challenge.

The winning solution, Hablame Bebe, was exactly the outcome we had envisioned. Hablame Bebe is a dual language app that promotes "language nutrition" and builds on cultural strengths and beliefs to reduce the word gap for low-income children. While there was technically one final winner, the challenge resulted in the development and scaling of five word gap interventions. The other teams' interventions represent an incredible diversity of approaches and expertise, including wearable devices that measure words spoken to a child, apps that provide feedback and modeling to caregivers, apps that are location-based and send prompts to parents in real-time, and community-based strategies. All of these interventions are available on iTunes and Google Play.

In this process, we learned so much about the power of the challenge mechanism to attract partners we never would have worked with, to garner public attention to the issue, and to result in the development of the desired product in a short amount of time.

The five semi-finalists were:

Hablame Bebe: An educational phone application that aims to empower Hispanic parents and caregivers to engage with their cultural identities, to feel pride in being Hispanic and in speaking Spanish, and to promote bilingualism.

Beginning with Babble: A mobile app that reminds caregivers to interact with their baby through a variety of developmentally appropriate stimuli that are situationally based and scaffolded by prior success, babies' interests, and parent engagement.

Starling: A wearable device that counts the number of words a child hears in real-time, with data accessible via an app and a web dashboard. Both parents and home visitors will be able to access this data in aims of creating and maintaining positive behavior change.

Word Gap App: A mobile app that offers parents and caregivers information on interacting with their baby in English and Spanish, provides alerts, videos, and tracks interaction. The app encourages use based on a point system.

The design of our challenge in three phases was a large factor in its success.  We were able to narrow the number of applicants through each phase to result in one final winner, providing incentives – both monetary and non-monetary – throughout each phase. In Phase 1, we issued a call for ideas, detailed in five pages or less.  Of the 90 submissions, we selected 10 to proceed, providing each with $10,000. The low barrier to entry allowed non-traditional participants with promising ideas but perhaps too few resources an opportunity to apply.  We leveraged both traditional and social media as well as partnerships to reach a broad audience, and received submissions from individuals, private businesses, and non-profit organizations. The unexpectedly large and diverse response validated to us how well a challenge could easily engage a broad set of innovators focused on solving a particular problem.

In Phase 2, with their award money, one-on-one mentoring from the Challenge Advisors, and support from the HRSA MCHB team and our contractor, the teams had six months to fully develop their intervention (or, if already developed, to implement the changes that were described in the initial application) and test its usability on the target population.  At the culmination of Phase 2, we invited the nine winners (one team chose not to continue participation) to the HHS headquarters in Washington, D.C. to participate in a live Demo Day. This consisted of a "Shark Tank" style presentation where they pitched their intervention to the Challenge Advisors, federal judges, and the public. After the day of presentations, we announced five winners, each receiving a $25,000 cash prize.

Phase 3 required these five teams to show that their intervention could be scaled at low-cost, with data about implementation on the program level. After six months, we held a virtual Demo Day, and selected the final winner, who received a cash prize of $75,000.

The benefits of this three-phased structure were numerous. Initially, the low barrier to entry in Phase 1 allowed for a broad array of potential solvers to participate. This diversity in proposals was a strength of the challenge, and something that could not have been accomplished by a one-phase challenge design, as some of the winning teams in Phase 1 could only continue to participate in the challenge with the seed funding of $10,000. As the teams progressed through Phase 2, they had the opportunity to learn what was and wasn't working, and to continually tweak and improve their interventions with feedback from the target population. By Phase 3, many improvements had already been made with support and guidance from the federal team and the Challenge Advisors. In Phase 3, the teams were required to plan for widespread scaling, and established additional external partnerships through their participation in the challenge to aid them in doing so.

In general, we found that a multi-phase challenge design yields rapid development and measurable impact; specifically, by using a multi-phase approach, the incubation pipeline is made possible. Additionally, this structure allowed for the value of lessons learned, feedback loops, and phase-specific evaluation criteria.

Applicants found the multi-phase structure incredibly useful for developing their ideas into Minimum Viable Products (MVPs). By giving 10 groups $10,000 and then five groups $25,000, the spread of capital enabled teams to hire developers, attract beta users to test the efficacy of their solutions, market their solutions to a broader audience, and travel to networking opportunities, without the challenge of having to generate external funding for these activities in a short time frame.

The challenge structure, as well as the accelerated development timeline, resulted in teams from academia and local nonprofits, for example, with developed MVPs, who were now thinking and acting like technology startups. These non-conventional startup founders learned how to design applications and market products, something that pushed them outside their typical area of expertise. Many applicants spoke about the Phase 2 testing as one of their most profound experiences, as it required them to engage with the caregivers whom they were developing products for, and to continuously improve their intervention based on this feedback. Many applicants felt strongly that these connections and intervention tests made a significant impact on the lives of their users and children.

The multi-phase structure benefits are reflected in feedback received from one of the teams: "The 'Incubation Structure' of this challenge is precisely why and how we learned what we did. Had it not been for the deliberately different phases, had it not been for the explicit 'What did you learn? What mistakes were made? What did NOT work?', I do not know if I would have changed my approach of inquiry."

With the guidance of the IDEA Lab and our Challenge Advisors, we built in multiple non-monetary incentives throughout the challenge to ensure that participants would continue throughout the three phases, and that the interventions would be continuously improved to result in the best iteration of the intervention by Phase 3.

We invited 10 external experts in the field to serve as voluntary Challenge Advisors. They represented content experts in academia, federal early childhood programs (the target audience), and technology experts. Initially, they offered insight into designing the challenge structure and the evaluation criteria for each phase, and in Phase 2 they served as one-on-one mentors for each Phase 1 winning team. The support, guidance, and insight into problem solving that they provided the teams from their own specific areas of expertise were invaluable.

In Phase 2, we supported travel for the nine teams to come to D.C. for Demo Day. At Demo Day, the nine teams were able to meet and learn from panelists including federal government staff who work in the innovation field, and also those from incubators and accelerators in the private sector, who gave information and advice on how to continue development and ensure broad reach of the interventions. While we funded the travel for the teams, the access to these thought leaders was a huge non-monetary incentive to continued participation in the challenge, as was connecting with each other and their advisors/mentors face-to-face.

After announcing the final winner, we wanted to continue to catalyze the development of the winning intervention as well as the four other evidence-driven products that were advanced to Phase 3. We linked the winners from each phase to our Bridging the Word Gap Research Network, where they have access to partnership with researchers in this field, to continue to test the efficacy and build the evidence for the long-term impact of their interventions. We are currently continuing to support the cohort of semi-finalists, and are providing them with additional opportunities for connection, collaboration with federal programs and partners, and opportunities for further promotion, such as a recent webinar hosted for MCHB Home Visiting grantees in all states that highlighted the five teams with information on where to access their interventions.

Additionally, as part of a highly-visible federal initiative, the participants have been able to leverage other partnerships and opportunities. For example, due to participation in this challenge, the five semi-finalists have secured:

Our challenge was both an ideas and software challenge. Not only did we want to spur creative ideas and new thinking to address the word gap, but we wanted to support tangible interventions that would be accessible to all families through technology. We succeeded in generating many innovative ideas that were supported through the design and incubation phases of our challenge, to result in low-cost, scalable apps (and one hardware device), accessible to low-income families in the United States. All five semi-finalists' solutions are currently available on iTunes and Google Play.