Nutrient pollution is one of the nation's most difficult environmental challenges. Nutrients, primarily nitrogen and phosphorus, are essential compounds for functioning ecosystems and the production of food, fiber and livestock feed. However, excessive nutrient levels can dramatically alter aquatic environments and have negative impacts on human health and the economy. Existing methods for measuring nutrient loads in water are costly and do not capture the full complexity of the different forms and how they exist and move in space and time through aquatic systems. 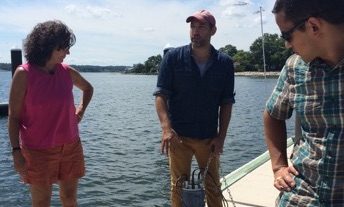 Beta testing provided an opportunity for teams to take advantage of no-cost, no-risk laboratory and field testing as an important milestone in the challenge. (Photo courtesy of EPA)

The Nutrient Sensor Challenge is a market stimulation and innovation effort to accelerate the development, adoption and use of affordable, reliable and accurate nitrate and phosphate sensors. The goal is for sensors developed through the challenge to be accurate, easy to use in maintenance-free deployments of up to three months, less than $5,000 to purchase and commercially available in 2017.   Although there was not a monetary prize purse for this challenge, competitors have access to testing facilities, the benefit of market stimulation and recognition, as well extensive third-party sensor evaluations. The organizers chose a prize competition to bring attention to the issue, identify innovative approaches from outside the typical disciplines, interact closely with collaborators and provide nonmonetary benefits to participants for their efforts in this market stimulation challenge. This challenge has agency collaborators, collectively known as the Challenging Nutrients Coalition, which include EPA, National Oceanic and Atmospheric Administration (NOAA), U.S. Geological Survey (USGS) and National Institute of Standards and Technology (NIST). In addition to federal collaborators, the Challenging Nutrients Coalition also partners with the Everglades Foundation, Tulane University, Partnership on Technology Innovation and the Environment (PTIE) and the U.S. Integrated Ocean Observing System (IOOS). NOAA is supporting the implementation of this prize competition through a cooperative agreement with the Alliance for Coastal Technologies (ACT).

The Nutrient Sensor Challenge was launched in December 2014. Prior to the launch extensive effort went into understanding and documenting the requirements of users of the potential sensors. The effort included a workshop that convened users and manufacturers to discuss the proposed sensor requirements that formed the basis for the challenge. Phase 1 of the Nutrient Sensor Challenge provided the opportunity for winning teams to participate in no-risk beta testing of the sensors. Additionally, the Nutrient Sensor Challenge hosted a highly successful Challenge Summit in Washington, D.C., where Phase 1 participants gathered to learn, network and demonstrate their abilities. The summit was an invaluable opportunity for the competitors and included a number of speakers presenting on topics including market opportunities, commercialization strategies and the future of environmental data. No-risk beta testing served as a resource to enhance the ability of all registered participants to prepare for the final challenge verification testing in 2016. Beta testing was conducted at three sites: the Chesapeake Bay, Huron River and coast of Hawaii. Following beta testing there was a request for additional information regarding the technologies. Participants had to demonstrate that the instruments fit within the scope and fundamental goals of the Nutrient Sensor Challenge, were based on sound scientific and technical principles and demonstrated a maturity or technology readiness level appropriate for independent verification testing and the ability to meeting cost targets.

The protocol workshop was held in fiscal year 2016, and final field verification testing began in May 2016. Final verification reports will be published and winners announced in December 2016.

In November 2013, the Challenging Nutrient Coalition convened a "visioneering" meeting of experts in the field of nutrient management. At that meeting two priorities were identified: the need for more and better information through monitoring and the need to engage communities and incentivize behaviors and decisions at a watershed scale. After much research and consideration the first priority was addressed through a challenge to accelerate the development of affordable nutrient sensors that could provide better data and information. Extensive work was done to understand user goals and needs and in September 2014 a workshopesired performance parameters and usability requirements for the next generation of aquatic nutrient sensors. Stakeholders and users at the meeting included federal agencies (USDA, USGS, NOAA-IOOS, NIST and EPA), nongovernmental organizations (NGOs), university labs, start-ups and a number of other early developers. These developers and users discussed the state of technology and options for lowering costs. End-users articulated acceptable trade-offs between costs and limits of detection, accuracy, precision, and deployment length and environment. These meetings were a critical step in identifying and prioritizing goals and desired outcomes of the first phases of the Nutrient Sensor Challenge. The goals for the challenge were to encourage the development and marketing of instruments with technology specifications that included precision, ease-of-use, accuracy, deployment time and cost.

Sensor targets were identified through extensive input from regional and state nutrient initiatives, federal agencies, NGOs, academia, industry, state associations and international groups. The goal of this effort was to obtain organization-specific information on the number and type of sensors that users in the research, monitoring and regulatory community currently use and would be willing to purchase if sensors met the challenge specifications. This provided extensive insight into the state of technology, cost, potential market sizes and incentives.

The second priority from the visioneering meeting could not be implemented until there were sufficient data available. It was contingent on the success of the Nutrient Sensor Challenge to make available sensors that would produce needed data to inform actions and decisions at a community level.

Area of Excellence #2: "Build a Team"

In 2013, the White House Office of Science and Technology Policy convened a group of federal 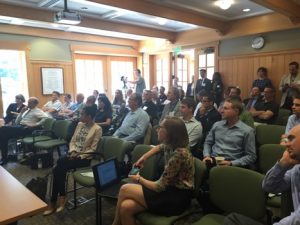 The Nutrient Sensor Challenge Summit in August 2015 provided an opportunity for the registered teams to discuss, learn, network, and demonstrate their abilities. (Photo courtesy of EPA)

agencies and NGOs to seek innovative ways to address pollution caused by excess nitrogen and phosphorus in water. This loose, informal coalition is known as the Challenging Nutrients Coalition. To date, this coalition consists of EPA, USDA, NOAA-IOOS, NIST, USGS, the Everglades Foundation, Tulane University and the Partnership on Technology Innovation and Environment. This coalition is working to improve our ability to measure and understand nutrient pollution and has launched several separate but related challenges to address nutrient pollution. In addition to the sensor challenge there have been two challenges addressing data visualization and a challenge aimed at recycling nutrients from pork and dairy.

The Nutrient Sensor Challenge has been successful because this team of agencies and NGOs recognized the complimentary goals and objectives regarding aquatic nutrient pollution. EPA has taken the lead role for convening and providing direction for this specific challenge, but it is important to note that there is ownership and commitment from across the team. NOAA, with support from EPA and USGS, has taken the lead for the testing and evaluation of the sensors through a NOAA cooperative agreement with the Alliance for Coastal Technologies (ACT). The coalition keeps in contact via email and quarterly principal meetings to discuss successes, needs and future coalition efforts.

EPA has been instrumental in the success of the Challenging Nutrients Coalition. Denice Shaw from EPA's Office of Research and Development's Innovation Team is the agency lead. The Office of Water, Office of General Council, Office of Environmental Information, Office of Public Affairs and the Office of the Chief Financial Officers have been involved from the beginning of this effort. These offices provide support for legal authority, messaging, outreach, communication, data and scientific review.

Submission requirements were identified and developed after extensive outreach and feedback from users and other stakeholders. This information was gathered over the course of a year and through a workshop to identify desired performance parameters and usability requirements after collecting initial data. Developers discussed the state of technology and options for lowering costs while end-users articulated acceptable trade-offs between costs and limits of detection, accuracy, precision and deployment length and environment. The gathered information was used to develop submission requirements. Other requirements pertaining to process were modeled after previous technology evaluation protocols and procedures that have been implemented by the Alliance for Coastal Technology (ACT) and other examples. To participate in verification testing, competitors agreed to a set of protocols that ACT provided. All ACT personnel involved in the verification testing have been properly trained on sample collection, storage and shipping methods. ACT staff were also available to assist in the physical deployment and recovery of all test instruments, but the challenge participants were responsible for initial set-up and calibration of their sensors.

numerous nonmonetary incentives. Because resources were not available to offer a substantial monetary prize, participants received other incentives, including market research and reporting, extensive use of social media, recognition awards and testing. The testing is being provided to participants in two separate phases of the competition. Before final verification testing occurs, an opportunity for beta testing was offered. This gave competitors free, no-risk testing for their sensor. Beta testing was offered in a variety of natural environmental conditions (brackish, marine and freshwater) and used a set of agreed upon protocols to ensure realistic deployment scenarios and accurate data. The testing sites were also chosen due to the partnerships between ACT, the University of Maryland, the University of Hawaii and the University of Michigan. These existing relationships meant that technicians at each location were familiar with ACT evaluation protocols and had the funding to support the verification testing.

Also, the extensive market research conducted has served as a great incentive to the competitors. The knowledge of the potential post-challenge market has been very valuable. The coalition is also exploring approaches and strategies related to current funding policies and regulations that would encourage and incentivize the use of continuous monitoring for nutrients.

At the conclusion of the Nutrient Sensor Challenge, affordable, reliable and accurate nitrate and orthophosphate sensors will be commercially available. While this challenge is aimed at accelerating technology development, because market stimulation was a primary goal of this challenge, the design and implementation of the challenge was structured heavily around market stimulation.

The first event held by the challenge was the Nutrient Sensor Challenge Summit in August 2015. This was an opportunity for the 29 registered teams to convene to discuss, learn, network and demonstrate their abilities. The summit served as a great meeting point of the technology developers and the users. The market efforts were emphasized and networking was encouraged among the attendees. Following the summit, no-risk beta testing began. This phase of testing was an opportunity for the teams to take advantage of no-cost, no-risk laboratory and field testing as an important milestone towards final verification testing in 2016. Final verification testing began in May 2016 and will be held in aquatic ecosystems in three locations – Hawaii, Michigan and Maryland.