Through a series of Future Engineers 3D Space Design Challenges, students from 5 to 19 years old focus on solving real-world space exploration problems and submit 3D model designs of 3D printable objects for an astronaut to theoretically use in space.  The challenge was developed to provide students with access to NASA's first 3D Printing in Zero-G ISS Technology Demonstration aboard the International Space Station, which validated the capability of utilizing additive manufacturing technology in space. The challenges provide students with NASA-mission-related design and research problems to assist with advancing NASA's technical capabilities. Submissions are judged on the innovation and creativity of the solution, the ability to advance human space exploration and the ability to communicate the design and quality of the 3D model through a text description and an interview.

Space Container Design Challenge: Students were asked to use their imagination to design and create a 3D model of a container that astronauts could print using the in-flight 3D printer and that would be useful for astronauts on current or future space missions.
Launch Date:  May 12, 2015          End Date:  Aug. 2, 2015

Star Trek Replicator Design Challenge: Conducted in collaboration with the 50th anniversary of Star Trek and the replicator technology, students were asked to design a non-edible, food-related object for astronauts to 3D print in the year 2050.
Launch Date:  Feb. 16, 2016          End Date:  May 1, 2016

Think Out of the Box Design Challenge: Students were challenged to design a useful object for astronauts on future space exploration that can be expanded or assembled to be larger than the available volume of a 3D printer.
Launch Date:  April 16, 2016          End Date:  Aug. 1, 2016

The Space Tool Design Challenge received 470 submissions from two age groups: 5 to 12 years old (junior engineers) and 13 to 19 years old (teen engineers). In the junior group, the 10 semifinalists received a 3D printing $50 gift certificate to allow entrants to print a design if they had no access to a 3D printer. The grand-prize winner of the junior group received a 3D printer for his or her school. The winning tool from the junior group was the Space Planter, which allows astronauts to grow plants with limited resources.   The four runner-up contestants in the teen category received a trip to Los Angeles to visit SpaceX and Digital Domain, an Oscar winning visual effects studio.  The winner of the teen group designed the Multi-Purpose Precision Maintenance tool that provides astronauts on the space station one tool that contains various features such as a wrench, socket, ruler, wire gauges and wire stripper without having to carry a number of different tools. The winner of this challenge will have his design printed on the International Space Station and discuss his design with astronauts aboard the station. 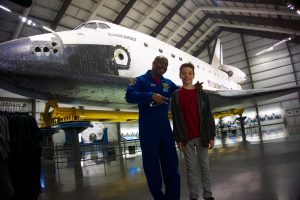 Ryan Bean of Scotts Valley, California winner of the Space Container Challenge with Astronaut Leland Melvin during tour of the Space Shuttle Endeavour at the California Science Center. (Photo by Deanne Bell)

The Space Container Design Challenge received 400 submissions from 36 states across two age groups: 5 to 12 years old (junior engineers) and 13 to 19 years old (teen engineers). In the junior group, the 10 semifinalists received a $50 3D printing gift certificate to allow entrants to print a design if they had no access to a 3D printer.  The four runner-up contestants received a one-week scholarship to Space Camp in Huntsville, Alabama.  The grand-prize winner received a 3D printer for his or her school and a private tour of the Space Shuttle Endeavor with an astronaut. The winning container from the junior group was the Flower Tea Cage, which uses the surface tension of liquids in a microgravity environment to allow astronauts to make tea. The winner of the teen group designed the ClipCatch, which will allow astronauts on the space station to clip their fingernails without worrying about the clippings floating away and potentially becoming harmful debris.

As of the writing of this case study the Star Trek Replicator Challenge and the Think Out of the Box Design Challenge are still underway.

The Future Engineers 3D Space Design Challenges were executed through a non-reimbursable Space Act Agreement via NASA's Other Transaction Authority (OTA), with the American Society of Mechanical Engineers Foundation.  The National Aeronautics and Space Act provides NASA with the unique authority to enter into a wide range of "other transactions," commonly referred to as Space Act Agreements (SAAs). The agency enters into SAAs with various partners to advance NASA mission and program objectives.  The SAA defines liability, intellectual property rights, use of NASA name and emblems, terms of agreement and responsibilities of each party. By utilizing a non-reimbursable agreement, each partner bears the cost of its participation and no funds are exchanged between the parties.

NASA participation in the challenge included:

ASME participation in the partnership included:

The success of the Future Engineers 3D Space Design Challenges can be attributed to the unique assets and nonmonetary resources that NASA has been able to provide. NASA and ASME jointly designed each challenge with the assistance of subject area experts from  NASA's In Space Manufacturing Project, Space Life Science Program, Crew Tools Office and Advanced Food 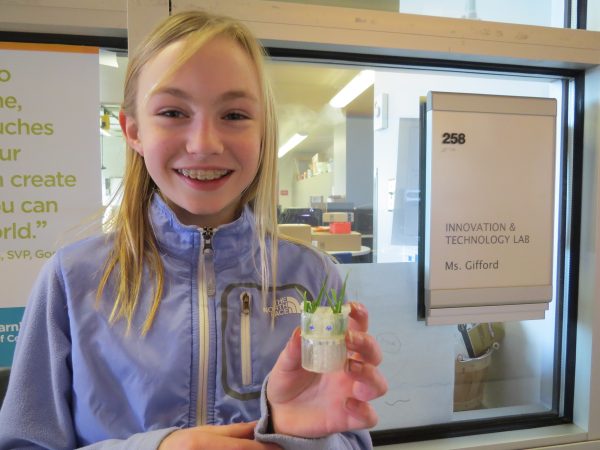 Sydney Vernon of Bellevue, Washington holds the space planter she designed as part of the Space Tools Challenge.
(Photo by Adrienne Gifford)

Technology Project. In the judging phase, NASA is able to provide a world-renowned expert in 3D printing in space to serve throughout the selection of finalists and a NASA astronaut to serve as a judge during the one-on-one interviews to determine the winner. In 2014, NASA installed the first 3D Printing in Zero-G ISS Technology Demonstration aboard the International Space Station to validate the capability of utilizing additive manufacturing technology in space. By working with NASA's In Space Manufacturing Project, NASA was able to provide access to this one of a kind facility to print the designs of the grand-prize winners of the challenges.

Through the ASME partnership, the challenges are able to provide additional prizes. The 10 semi-finalists from both age groups in each challenge received a $50 3D printing gift certificate to allow entrants to print a design if they do not have access to a 3D printer and the grand-prize winners of the junior groups received a 3D printer for their school. One of a kind experiences such as tours of a retired space shuttle from a NASA astronaut are awarded with ASME covering costs associated with room, board and transportation.

The 10 finalists in each category are publically recognized at events, in social media posts, through web features and at annual meetings by NASA, ASME and partnering organizations such as CBS Star Trek, California Science Center and the Intrepid Air, Sea and Space Museum.

The Future Engineers design challenges served as excellent examples of partnering to launch student-focused challenges that yielded results to stimulate the development of STEM-related skills but also yield direct technical benefit to NASA in terms of innovative approaches to 3D printing in space.  NASA is developing technologies needed for travel deeper into space than ever before by adapting and leveraging the rapid evolvement of additive manufacturing technologies on the ground for in-space needs. Currently human space travel is dependent on flying everything from the ground to the space station thus limiting the supply chain. In order to explore further-out destinations, like the moon or Mars, that supply chain model isn't feasible. Additive manufacturing would allow astronauts to respond in real time, in a sustainable, affordable way, if parts get lost or broken. Being able to create what you need, when you need it, on these types of missions is a critical enabler to sustainable, affordable exploration missions. Having a workforce with the skill set and creativity needed to design and build these parts is of utmost importance. Future Engineers challenges our next generation of explorers to use their science, technology and engineering skills along with their creativity to design and create 3D models to solve real space problems, thus preparing them to fill future additive manufacturing workforce needs.

Hear From the Finalists