In 2013, NCI in partnership with the Center for Advancing Innovation (CAI) conceived the idea to create a startup challenge as a strategy to move promising, early-stage National Institute of Health (NIH) technologies to the market. Later that year, NCI, CAI and a philanthropic partner, the Avon Foundation for Women, launched the Breast Cancer Startup Challenge (BCSC), a first-of-a-kind, international university-based competition. The idea arose from the need to address a fundamental problem: NCI technologies are typically very early stage, and there is a need to find partners to help develop them. However, the potential partners—biomedical companies—are reluctant to form partnerships around early-stage discoveries because of lengthy developmental timelines and high financial risk.

In creating the BCSC, nine emerging breast-cancer-related technologies were selected from the NCI patent portfolio, and one technology from the Avon Foundation for Women Grantee portfolio, with the primary goals of bringing them to market and stimulating the formation of startup businesses. The BCSC was one of the first competitions to focus on the creation of startups and is an innovative approach to licensing emerging federal technology and moving it to market. In addition to helping advance development and commercialization of multiple NCI inventions, the BCSC created a new model that can be applied to advance other federal technologies. Based on the BCSC framework, NIH has since launched the Neuro Startup Challenge and the Nanotechnology Startup Challenge. 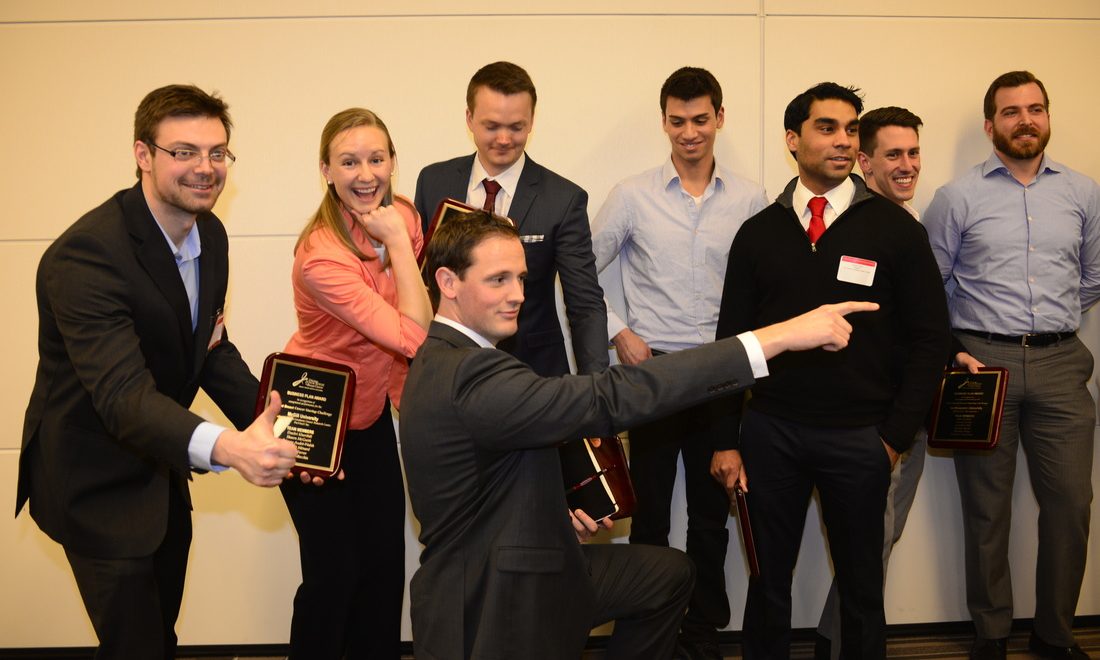 Winners and finalists from the challenge pose with their awards. (Photo courtesy of NCI)

The primary goal of the BCSC was to accelerate the development and commercialization of emerging breast cancer technology by designing a new competition that would result in the creation of startup companies. Because of the long, complex developmental timelines associated with biomedical technologies, blazing new ways for invention development is needed to meet the agency mission. The creation of BCSC was a way to address that; it provided another option and an additional way to find partners who can develop and commercialize potentially life-saving technology.

While a total of $50,000 in cash prizes were awarded to the 10 winning teams, the larger incentive was the opportunity to create a startup company around a promising NIH invention, and the opportunity to work with NIH and the CAI to further a business plan and develop early-stage breast cancer technologies.

Notable results include the following:

Area of Excellence #1: "Build a Team"

In 2013, NCI entered into a Partnership Intermediary Agreement (PIA) with CAI, a nonprofit, to evaluate and offer recommendations to help evaluate, market and commercialize the NCI patent portfolio. An outcome of that effort was the idea to create a business and startup challenge to help move certain technologies forward. Breast cancer was selected as the focus of the challenge. CAI was already working with the Avon Foundation for Women, and a three-way collaboration agreement was developed to implement the challenge by NCI, CAI and The Avon Foundation for Women.

Each partner and member of the team played a crucial role in the launch and execution of this challenge
NCI advocated for the challenge by identifying and engaging multiple internal (federal) stakeholders early in the design process and obtaining their support before moving forward. This was a crucial, necessary and time-consuming effort; without the input and support of the key stakeholders, the challenge likely would have never gotten off the ground. Leading this effort, the project champion from the NCI Technology Transfer Center (TTC) sought feedback from NCI senior leadership (on the overall program), TTC staff (about design and technologies) and NCI's offices of communications and legal counsel.

NCI analyzed multiple inventions from its portfolio and selected technologies ideally suited for the challenge. This included engaging the NIH Office of Technology Transfer to analyze information on the patents and likelihood of licensing the inventions.

CAI conceived the initial design and collaborated with NCI to refine details of the challenge timelines, criteria, etc. The center developed and implemented a stakeholder engagement plan to entice entrepreneurs and university students to form teams and enter the competition. This required massive amounts of outreach to create awareness about and update the challenge model based on inputs. CAI managed all interactions with the teams entering the challenge and all interactions with the winning teams and startups at the conclusion of the challenge. This meant ensuring that teams met predetermined criteria to enter, managing the submission process and facilitating "live pitch sessions" by the competing teams.

CAI analyzed the NCI patent portfolio and provided input on inventions that would be suitable for the challenge given their commercial viability and most optimal commercialization path (being a startup). CAI also established a panel of qualified judges, mentors and advisors and managed the judging process.

Finally, the center also was instrumental in developing content on a variety of fronts, from the creation of training curriculum and course materials to the production of press releases and social media posts.

The BCSC is a novel way to address a fundamental problem, focusing on creating startup companies to help develop and commercialize particular inventions rather than seeking out large commercial partners unwilling to invest at an early stage. CAI and NCI partnered to analyze the NCI patent portfolio. They selected nine promising breast-cancer-related technologies suitable for commercialization by startup companies.

Together NCI and CAI designed the framework for a startup competition targeted to university students. The framework included specific and strict criteria to enter the challenge. For instance, in order for a team to compete, it was required to form a multi-disciplinary team that included at least one seasoned entrepreneur, and students majoring in business, legal, medicine, science and, in certain cases, engineering or computer science. Teams averaged 10 members and typically included mentors and advisors who were industry leaders, venture capitalists, foundation executives, subject matter experts and academics.

The challenge framework was designed to cover three phases. Teams entered in the first phase.  In the second phase, teams were tasked with presenting a live, five-minute sales pitch to a panel of judges and with creating business plans to develop and commercialize NIH inventions.  In the third phase, the 12 BCSC winners and finalists incorporated their startups, began to raise funding and negotiated with the NIH Office of Technology Transfer to receive licenses to the technologies.

CAI, working with NCI, took the lead in developing and executing the communications plan for the BCSC. It was developed and executed against a comprehensive stakeholder engagement plan to engage all members of the ecosystem at every step in the challenge. This included:

Area of Excellence #4: "Prepare to Announce"

In preparation to launch the BCSC, CAI:

For in-Challenge metrics, interested participants were tracked by way of the entry forms that they were required to complete in order to register for Phase 1 of the Challenge. The entry forms included confidential disclosure agreement forms, letter of intent forms and the resumes that they were required to provide. As the phases progressed, we also required teams accepted to continuously update CAI on any additions and subtractions to their teams. We captured each individual's organization, title, geographic location, years of experience and working discipline.  We were able to convert these answers into metrics for the challenge.
Key metrics from Phase I show the sheer number and diversity of participants:

CAI also obtains metrics for the startups and teams after Phase 2 through a number of auditing methods. For example, CAI sends out periodic feedback forms asking the startups for a feedback about the status of licensing the technology from NIH, incorporating of their startup company, the status of their team structure and progress with obtaining funding. Based on lessons learned from the BCSC, CAI has also developed a new "Founder's Agreement."  The agreement outlines requirements of challenge winners, including requirements to provide status updates to CAI and to work closely with the CAI team to track their progress.

Through these follow-up methods, we have found that the challenge resulted in:

As an example of a great entrepreneurship challenge, the BCSC: