Water demand is expected to increase more than 50 percent by 2050, meaning the number of people impacted by water scarcity will continue to grow. More than 70 percent of global water use occurs in the food value chain, but often local ground water is brackish and unsuitable for crop irrigation. These factors will eventually lead to detrimental impacts on human health and food production in developing countries. One way to satisfy future water demand is to augment traditional water supplies with brackish groundwater. 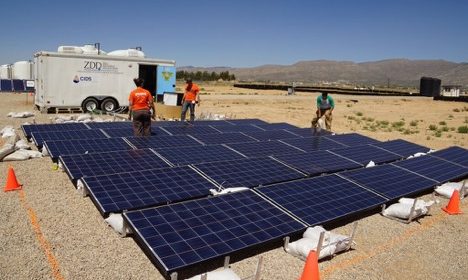 Set up begins for the DESAL demonstrations. (Photo courtesy of USAID)

In March 2014, USAID partnered with the Bureau of Reclamation to launch the Desal Prize—the second call for proposals under the Securing Water for Food Grand Challenge for Development (SWF GCD). The goal of the Desal Prize was to incentivize teams to create environmentally sustainable, small-scale brackish water desalination systems that can provide potable water for humans and crops in developing countries.

The Desal Prize offered a unique opportunity for innovators to prove their technology in a head-to-head competition. Finalists competed for a total of $200,000 in prize funds during the competition at the Brackish Groundwater National Desalination Research Facility in Alamogordo, N.M. The top-performing technologies were also eligible to receive another $400,000 in grant funds to implement pilot projects to showcase their technologies to small, rural farms in a USAID mission region. A chance to participate in the pilot program and hone their technologies can also be considered a nonmonetary incentive for entrants.

Ultimately, the primary goal of the Desal Prize was to motivate innovators to develop and improve technologies that are capable of turning dirty, brackish water into clean, usable water for crops, livestock and human consumption using only energy from the sun.

USAID partnered with the U.S. Bureau of Reclamation to run the Desal Prize. The governments of Sweden, South Africa and the Netherlands were also partners in the Securing Water for Food Grand Challenge for Development.

The timeframe for the challenge was:

The Desal Prize attracted more than 60 teams from 29 different countries. Nineteen of these teams were from developing countries and nearly 90 percent of applicants had never previously applied for funding from USAID. Five teams qualified to go to the Brackish Groundwater National Desalination Research Facility in Alamogordo, N.M., to showcase their technologies in a head-to-head competition.

The competition lasted for two days. The goal was to produce the highest percentage of potable and agriculture-use water while only using renewable energy. As expected, not everything went smoothly. There were technical issues that pushed the contestants to their limits. But in the end, a collective spirit of collaboration helped the competitors overcome these obstacles, and the teams had an opportunity to discuss their work with their peers.

Two teams were selected for their top-performing brackish water desalination technologies. The team from MIT and Jain Irrigation Systems was awarded first place for their photovoltaic-powered electrodialysis reversal system. The team from UTEP Center for Inland Desalination Systems finished second with their Zero Discharge Desalination technology. These two teams were awarded the prize money and are eligible to receive up to $400,000 in additional grants to pilot their technologies in field tests.

Area of Excellence #1: "Define the Problem to Be Solved"

The Desal Prize emphasizes innovation in desalination technology development and environmental sustainability with a common goal of creating a technology that serves a dual purpose to provide water that is safe to drink and water that is appropriate for agriculture. The Desal Prize was developed to supply catalytic funding to capture and support the innovative ideas and new technologies that could have a significant impact. The Desal Prize challenged innovators throughout the world to create cost-effective, energy-efficient and environmentally sustainable desalination technologies that can provide potable water for humans as well as water that can be used for crops in developing countries.

When the SWFF GCD was developed, a state-of-innovation analysis for desalination was performed.  This analysis confirmed that brackish water desalination was a field in which technologies are within three to five years of being commercially available and financial investment into this field could greatly accelerate this rate.  An independent state-of-innovation analysis by the U.S. Bureau of Reclamation (USBR) confirmed this finding. Based on a state-of-innovation/barrier analysis, primary and secondary research, farmer input and prize design consultation the prize formulation was determined.

At the early stages of prize design USAID and USBR worked closely together to determine the state of innovation in small-scale desalination devices.  USAID asked the Knowledge Services Center of USAID to perform additional research to validate any findings in this area.  This research was supplemented by primary interviews with desalination experts in academia, government and industry.  USAID and USBR organized an expert panel discussion at the 2013 International Desalination Workshop in Australia.  The purpose of the discussion was to better understand the small-scale desalination needs in the developing world.  The discussion provided information about the current state of innovation and a consensus of expert opinion about small-scale desalination device performance criteria for total dissolved solids (TDS) removal, flow rate/volume, energy requirements and cost. After the workshop USAID and USBR drafted a report that outlined the current state of innovation and the rationale for the performance criteria for the prize.

To better understand the small-scale farming landscape and end-user needs USAID interviewed experts in rural farming practices in developing countries.  USAID took the lead in performing end-user analysis. In addition, USAID analyzed household surveys provided by USAID and the World Bank to better understand the small-scale-farmer agricultural needs and farming practices. USAID remained in contact with several Middle East missions including West Bank/Gaza and Jordan, and Asia missions including Indonesia, Bangladesh and Thailand to better understand water-related issues of interest to the regions.

The Desal Prize used the open-discussion format of the request for information (RFI) to allow a crowd of diverse technical backgrounds to fully discuss the questions and the answers. This approach led to a more thorough understanding of the potential pitfalls and successes of the prize.  Additionally, the RFI included a section where the crowd could pose questions they believe to have been overlooked by the organizers.  This RFI was an opportunity for the desalination community to weigh in on what is needed and what is possible in the realm of small-scale brackish water desalination.  Although open forum communication was encouraged, those who wished to submit responses privately had the ability to do so.

The Desal Prize brought together the brackish water desalination community with the common goal of creating an environmentally sustainable technology that serves a dual purpose to provide water that is safe to drink and water that is appropriate for crops.

Area of Excellence #3: "Estimate Budget and Resources"
A total of $200,000 in monetary incentives was available during head-to-head competitions. An additional $400,000 in grants was available to the top-performing teams to implement pilot projects to showcase their technologies to rural farms in a USAID mission region. A chance to participate in the pilot program and hone their technologies can also be considered a nonmonetary incentive for entrants.

Resources: One full-time USAID staff member and two part-time USBR staff members were used. USAID provided a total of $1 million and USBR provided more than $500,000 for the USAID Desal Prize administration and awards. The budget figures are inclusive of most staff time and testing. Former American Association for the Advancement of Science fellow Jarah Meador's time was not included in the cost, which would have added an additional $200,000 to the total.

Prize Management:  The prize was run in-house at USAID and was hosted on the SWFF GCD website under a separate tab for "prizes."  The prize request for information, Q&A, request for applications, application intake and judging occurred on the Chaordix platform on the SWFF GCD website.  Although USAID had ultimate authority over the day-to-day running of the prize and all top-level decisions, USBR participated as a host for the Phase 1 demonstration and served as a technical advisor for the prize.  The roles and responsibilities of USAID and USBR are described in detail below.

The Desal prize was designed as a Technical Point solution prize with a demonstration/competition component. The demonstrations were conducted in two phases.

Following review of the video submission and operational documents, the Desal Prize team scheduled a call with each team lead to discuss the materials and made determinations about any additional operational considerations. Teams that did not provide sufficient evidence (via video and teleconference consultation with the Desal Prize team) of prototype functionality were not allowed to compete at the Phase 2 technological demonstration at the Brackish Groundwater National Research Facility (BGNDRF).

The five top performers (finalists) from this group received $10,000 each to ship their prototypes to the prize competition site in New Mexico.

In addition, the semifinalist teams selected to demonstrate at the BGNDRF were required to submit their slide presentation file that details the technological approach and cost analysis. The slide presentation file was sent to the judging panel and the Desal Prize team to allow a review of the contents in advance of the demonstration at the BGNDRF.

In addition, the Desal Prize was featured in blog posts and articles including the Water Desalination Report. The Desal Prize staff attended conferences and webinars to further enhance communications efforts.

For the Phase-2 Technological Demonstration, semifinalist teams were required to submit the following via the platform found at http://thedesalprize.net:

The process for accepting solutions to Phase 3 required participants to ship their technology prototypes to the demonstration site for testing.  The USAID Desal Prize worked with the Bureau of Land Management to detail the shipping and receiving process to the BGNDRF.

Semifinalist desalination systems must be powered by renewable energy.  The entire autonomous system that harnesses renewable energy and powers the system must be present in its entirety at the time of the Phase 2 Technological Demonstration.  Teams were not provided with any electricity to run their systems. Each semifinalist team was required to communicate (via the operational plan) and coordinate the shipment and removal of their desalination system with the BGNDRF staff prior to the end of the competition.  Teams were responsible for arranging shipment of their system with a local carrier.

Powering technologies by renewable energy and creating agricultural-appropriate water was a new and challenging exercise for all teams. The competition has greatly accelerated the development of innovative and feasible desalination technologies for small-holder farmers. The competition has incentivized desalination innovators to broaden their market access goals to include developing countries. All of the teams that participated in the competition had reasonable plans to greatly reduce cost during the pilot phase.

The top two performing teams of the competition are led by women and are from universities. The winning technologies produce twice as much freshwater as reverse osmosis, reduce environmental impact and use only renewable energy for power. For one top team, the competition accelerated development of its technology from a bench-top prototype to full scale model in only six months compared with an estimated two to three years.

The U.S. Bureau of Reclamation proved to be an ideal partner for the Desal Prize. The performance criteria were designed to be extremely challenging, yet possible. All teams overstated their expected technological performance in their application and presentations to the judges, and only through a head-to-head competition were the real performance values of the technologies able to be determined. The competition allowed learning through failure. Many of the technologies experienced catastrophic failures, which allowed identification of critical design flaws that must be identified in the prototype stage before investment to allow scale.